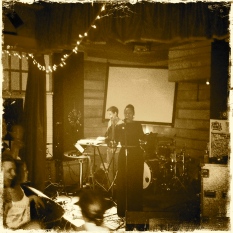 Much like drum’n’bass, the almost nonchalant, subzero soul of UK Garage went back to ground after enjoying its brief spell in the Ayia Napan sun and subsequent commercial heights, before emerging renewed, transformed, all growned up.

Self-released in November 2011 and coming to my attention early this year, an old friend posted the video of ‘Hide Yourself’ on facebook with the words “Very LDN” – and who could argue.

This is all London, instantly conjuring images of streaking streetlights above cold, desolate bus stops. The City at its most effortlessly cool and icily aloof. So busy by day, now empty at night.

Shortly thereafter, 14th played at the bar of my employ. The electrifying him&her duo making a rare spontaneous stop-out for myself far more fulfilling than your average midweek misadventure.

On stage, Tracey Duodo’s easy charm and charismatic looks are a perfect foil for Tom Barber’s studious boffinry. Musically this relationship is played out ten-fold.

Duodo’s voice, singular but unaffected, is truly spectacular. At once striking, vulnerable and robust, it gives just enough depth to Barber’s contrary 2-step productions without drowning them.

Their slight output – as yet unsigned – is all good. ‘Hide Yourself’ – from forlorn piano and echo, through looped harmonies and round, deadened, asymmetric beats – is truly great.