Musical Encounters was the theme for Friday at the Proms, with Jonathan James talking about the universal commonalities in music throughout the world and giving a potted history of cross-cultural pollination in classical music, before a concert from two musicians from conflicting politico-religious camps. 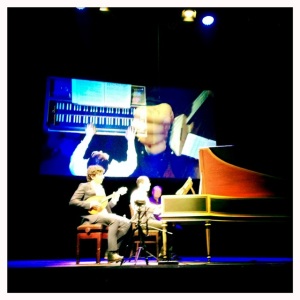 Avi Avital is an Isreali mandolin player par excellence, whilst Mahan Esfahani is an eminent Iranian harpsichordist. Having met that morning the two players performed a musical ‘show and tell’ on the kind of Baroque-era instruments that the Bristol Old Vic’s 18th Century acoustic technology was designed for.

This was, as ever, world class musicianship and Bach was again a springboard, apparently providing a common point for most classical musicians as a composer of deeply human, emotionally complex works “beyond language, culture or instrument”.

Later in the evening, Valentina Lisitsa’s Music Party was back to breaking down the walls between classical music and the people. To this end the internet sensation was stridently insisting on an ‘anything goes’ party in her front room; sofas were placed on the stage for several lucky audience members, colourful balloons were dotted around, and the #BritolProms twitter feed was projected on the big screen for all to share in. 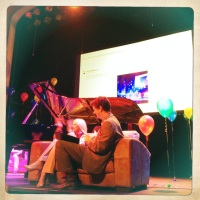 There was a ballot to decide the program for the evening, and while the votes were counted Tom Morris engaged in an irreverent tête-à-tête with Valentina on the couch. During the ‘interval’ we were treated to two spontaneous and accomplished performances from young musicians taking up the invitation to play on the Steinway.

As a boldly social and uniquely interactive experiment, so far so good. 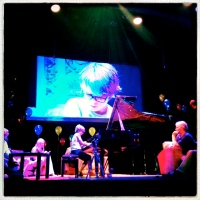 Valentina is more than a little eccentric in person but a truly compelling performer, and the crowd were silent and revering not in adherence of any social norm but because it was a natural response to a such a staggering level of virtuosity and sentiment. 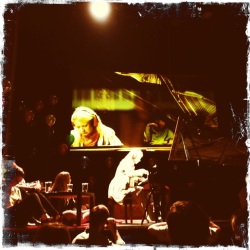 Her final piece was played whilst wearing noise-cancelling headphones, which brought an almost voyeuristic intimacy to proceedings as the pianist appeared to lose herself entirely in a passionate performance of spectacularly complex finger work.

It all made for a very special concert, but not just for the laid back environment of the billing – for this was like no house party I have ever been to. Instead it was more simply a joy and a privilege to experience being, in the words of Tom Morris, “in the presence of greatness”.

One thought on “#BRISTOLPROMS – Day 5”