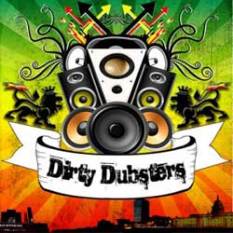 “What do you call this kind of music?” asked my girlfriend’s little sister. It’s a question I am confronted with often and seldom answer to my own satisfaction (never to the questioner’s). This case was no exception.

What do you call a music that references reggae and dancehall, hip hop and breaks? Nothing snappy springs to mind. At least, nothing that sounds anything less than unpalatably cheesey.

To further confound, I had assumed the lyrics referenced a member of the crew answering to the moniker Doublin’ or Dubbelin, but as unlikely as it sounds, this huge, bouncing ragga-hip hop party bomb (see what I mean?) hails from the Irish capital – albeit with contributions from Australian and American nationals.

Over the last few years Dublin duo OBese and Jay Sharp have amassed a heavy arsenal of cuts, spanning nu-funk breaks, house, hip hop and drum’n’bass, that goes some way to explain the unclassifiable nature of this first of their “Dirty Dubplates”, but nothing from the back catalogue comes close to its perfectly pitched bad(-meaning-good-)ness.

Despite a satisfying dub reggae melody, a beefy steppers rhythm and wobbly, sub-bass foundation, it is Florida’s Bass Nacho and his playful genius that gets the dancefloor on board.

You could argue its appeal derives from the juxtaposition of serious dirt in the mix with the almost playground worthy “bow-chicka-wow” chorus, but you can over-analyse these things. Really ‘Big Tings!’ is just a tidy little package of crowd-pleasing, dubby pop dancehall that I like to call… erm…