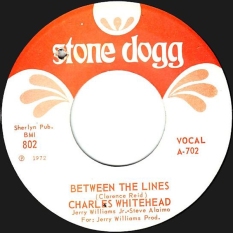 In an effortlessly loose and complex arrangement the brass punches way above its weight, bass and melody bob and weave in intricate circles and Whitehead and the boys give it to you straight; your girl’s likely playing away and this is how we know.

Penned by the great Clarence Reid in a typically sanguine take on two-timing suspicions, ‘Between the Lines’ combines a call and response count on the verse with a killer chorus that outside of a brief airing on RJD2’s 2001 breakathon Your Face or Your Kneecaps hasn’t seen much light since being cut for mentor Jerry Williams Jr’s short-lived Stone Dogg in the early ’70s.

‘Between the Lines’ by Charles Whitehead was released as a 7″ [Stone Dogg].