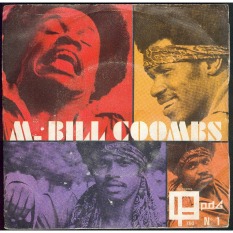 Sneaking into the party with what sounds like the doo-wop breakdown from Sly & the Family Stone’s ‘Dance To the Music’ and crashing out two-and-a-half minutes later amid insistent horn stabs, tumbling drums and a series of unrestrained wails and whoops, M. Bill Coombs’ ‘You Wine Me Up’ [sic] is a masterly slice of French funk that on closer listening betrays producer Daniel Gérard and arranger Hervé Roy’s easy listening pedigree.

Best known for his lounge-core ‘Lover’s Theme’ from notorious fluffy sex bore Emmanuelle, Roy worked with the greats of seventies French pop while turning out library instrumentals under his own name. Who knew he already had this Isleyan monster under his belt?

There’s nothing ‘lite’ about the funk here. The arrangement – especially the superiorly cheeky brass interplay – carries the warmth of those kitsch classics, while some seriously mean chops and the tormented lyrics of Bill “Bad Child” Coombs – whoever he is when he’s at home – bring something balefully raw to the table.

Sitting plumb in the middle of a hens teeth three-track 45, ‘You Wine Me Up’ is a rare and thrilling blend of rough and smooth, red hot and stone cold.