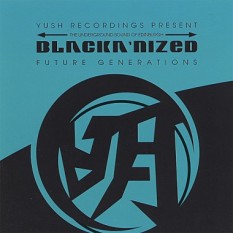 Centred around a jaunty and elusive sample from what I assume is Andy William’s ‘Can’t Get Used to Losing You’, the bouncing bass and forceful female ragga vocals of ‘Fade Away’ opens the third side of Blacka’nized’s Future Generations.

Representing the “Underground Sound of Edinburgh”, the 1999 album sees AJ Nuttal (aka Yush) and Joseph Malik (then DJ, later vocalist of Joseph Malik fame) trying their hands at the gamut of downbeat hip hop and breaks workouts. One track might sound to all the world like the Herbaliser, the next Soul II Soul, another Nightmares On Wax.

At the time Malik was involved in the Lizzard Lounge, a fondly remembered world funk night held in the (again) fondly remembered, barely converted church Cafe Graffiti, and there is a strong jazz leaning across the album that, along with the customary eastern philosophy references, brings a less than typically Scottish warm front to the trip hoppian proceedings.

Contrary to the name, some of the tracks on Future Generations have stood the test of time more solidly than others and despite ‘Fade Away’ soon being reworked to a busier dancehall end as Yush 2K & Sandra Nubia Melody, it is this seemingly empowering (I’m not overly confident of the precise lyrics to be honest) tirade that hasn’t faded at all.