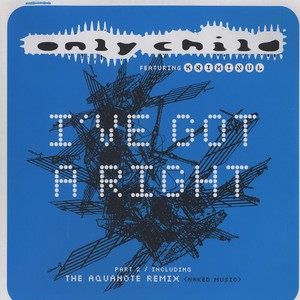 Flitting between cocktail lounge house and headnodding hip hop, Only Child’s output on Grand Central is crying out for reissue five years after the demise of the label.

Arguably the talent if not the charisma behind house DJ/promoter duo The Unabombers (aka The Electrons of ‘Get Up’ near fame) and their (now departed) club and (very much alive) mix compilation brand The Electric Chair, Justin Crawford cut his teeth on the Manchester label (see Fly By Night) with two albums of increasingly well received, ever more house-orientated productions.

Kicking off proceedings on debut album Satellites and Constellations (or popping up after the endlessly building, interplanetary afro-house of ‘Space Disco Latino’ at the tail end of part two of the 12″ release) ‘I’ve Got a Right’ shimmies in from the ether with a glittery filtered intro before Mark Rae’s cut-ups announce the arrival of the tune proper alongside solid beat and bass and the typically tough talk of Jigmasta rapper Kriminul – himself no stranger in the GC oeuvre and a provider of unhurried genius on more than one Only Child track.

Completing the picture is the brilliantly soulful and bittersweet Sarah Vaughan sample of the title that serves as a chorus and marks the track out as classic millennial Manchester hip hop from a label that couldn’t put a foot wrong.

Ironically, rumour has it that it was unpaid royalties that brought Grand Central to its knees in 2006.

‘I’ve Got a Right’ was released as a single on CD and two-part vinyl, and featured on the album Satellites & Constellations [Grand Central Records].